Garage / Ford / Mustang
The Ford Mustang is an automobile manufactured by the Ford Motor Company. It was initially based on the Ford Falcon. Production began in Dearborn, Michigan on 9 March 1964 and the car was introduced to the public on 17 April 1964 at the New York World's Fair.

It was Ford's most successful launch since the Model A.

Executive stylist John Najjar, who was a fan of the World War II P-51 Mustang fighter plane, suggested the name.

The Mustang created the "pony car" class of American automobile - sports car-like sedans with long hoods and short rear decks and gave rise to competitors such as GM's Camaro, AMC's Javelin, and Chrysler's revamped Barracuda. It also inspired coupes such as the Toyota Celica and Ford Capri, which were exported to America.

Mustangs grew larger and heavier with each model year until, in response to the 1971-1973 models, fans of the original 1964 design wrote to Ford urging a return to its size and concept.

Although some other pony cars have seen a revival, the Mustang is the only original pony car that has remained in production without interruption after four decades of development and revision.

The first-generation Mustang was manufactured by Ford from March 1964. The introduction of the Mustang created a new class of automobile known as the pony car

For 1994 the Ford Mustang underwent its first major redesign in fifteen years. It featured styling by Bud Magaldi 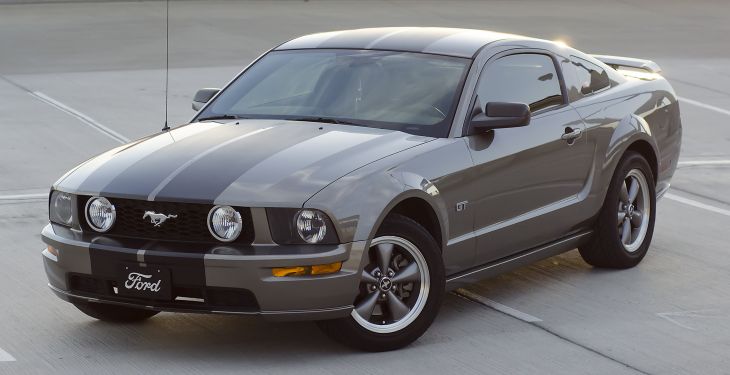 The fifth generation began with the 2005 model year, and received a facelift for the 2010 model year.