Hot Wheels released Ford Mustang Mach I in 1998 and it immediately became one of the popular castings among the collectors. Mattel made sure to keep us happy by releasing numerous variations. Different sources report from 70 to over 100 variations known today.

To say the truth, not everyone liked the casting. The real car proportions are different. The way Hot Wheels designer Phil Riehlman envisioned the model makes it look almost cartoonish. The real Mustang Mach 1 sits much lower to the ground and has a more aggressive profile.

The other complaint was that the design of the rear spoiler. Up until 2013, the rear window was a separate piece that incorporated the spoiler. The issue is that it was easy to pop it out and lose. The model that we have on the photo shoot today, has brought the long-anticipated change. This copper Ford Mustang Mach I from Hot Wheels Cool Classics Series 1 is the first car to have louvers as a part of the interior piece and the rear spoiler as a part of the body. Many people welcomed the change and I have to agree with them. It looks much better and feels more sturdy.

This is the second time we feature Cool Classics on our website and there is a reason for that. The "Spectrafrost" paint allows the cars to reveal their character in front of the camera. Both Mach I and Shelby GT500 have bright colors that work well with virtually every background. Enjoy the picture gallery and stay tuned for more! 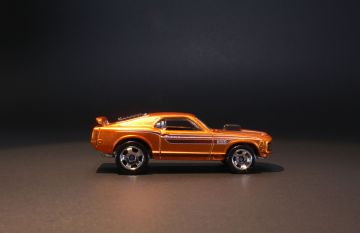 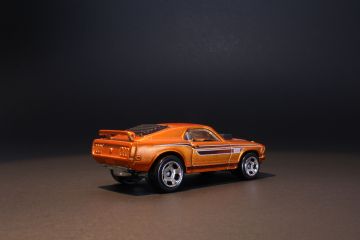