2010 gave a start to several great Hot Wheels muscle car castings. Among them was 1967 Chevrolet Chevelle 396. It was a dream car for many car enthusiasts in real life. Mattel made a great choice by bringing it into the main line.

This gold variation was a recolor of the First Edition maroon model. Some say that the silver tampos look bleak on top of the yellow metallic paint. Indeed, a darker background would make them stand out more. On the other hand, it keeps the car color scheme close to the real car looks.

The side stripes stirred quite a controversy on several diecast messaging boards. Many people were convinced that the model had so called "Oldsmobile Stripes". While being very similar to the ones you can see on this Chevelle, they actually are Chevrolet RPO D96 Sport Stripes. Calin Head from Super Chevy did a thorough research of Chevy stripes in 2013. The main difference is that Oldsmobile had one thick stripe, while Chevy D96 horizontal sections were accompanied by an additional thinner stripe.

Hot Wheels designer Brendon Vetuskey did once again a great job by choosing the right colors for the first model release. The car has gold metal flake exterior, tan interior, and chrome plastic base. A set of 5SP wheels compliment the overall great look. 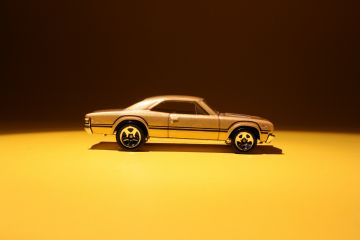 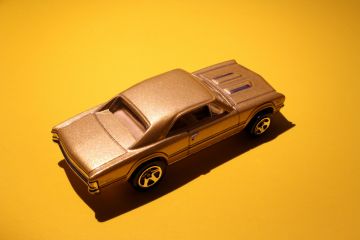